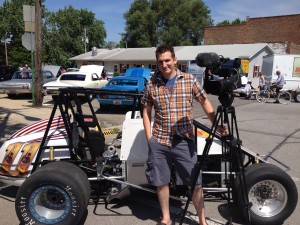 Phil in front of the vintage TripleX Root Beer racecar at the Homer Soda Fest 2014.

It’s fun to watch things grow, and the Homer Soda Festival has done just that. While it’s difficult to count exactly how many people attended, some estimates we’ve heard were between 6,000 to 8,000 people. From our perspective, it was much more challenging this year to capture interviews with vendors because they were so busy helping everyone, and the car show had grown so much that they were running out of space on the street to park all of their vintage vehicles.

The Homer Soda Company retail store was slammed. Trying to go in and get good shots of soda sales was almost impossible because it was wall-to-wall people, and although they stocked a lot more soda this year, they still had a hard time keeping all their flavors in stock.

The food was amazing, the activities for kids were top-notch, and everyone we interviewed was in high spirits and having a great time. We even spotted a stagecoach ride taking place near the old Model A cars on the south side of town, and a new company called Joyful Bubbles was making some of the biggest soap bubbles we’ve ever seen.

This year we shot so much footage that we couldn’t cram it all into one short video without cutting some moments that we really loved, so we split the footage up into three separate videos, one highlighting the festival, one focused a bit more on the car show aspect of it, and another for Coca-Cola collector David Lee. Each video will help play a unique role in building interest and excitement for the festival’s third year in 2015.