If you would like to support Austin and his awareness efforts, there are several places where you can get some pretty incredible merch! 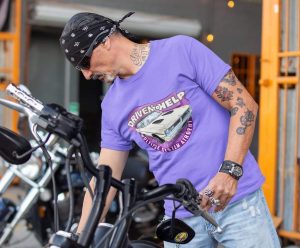 Austin began Wheels for a Cause to raise money to provide wheelchairs for those suffering from MSA and other illnesses. To date he has provided at least 5 wheelchairs and other aids through this charity work.

“I just want to make it to Christmas,” Austin Crawford says, as he fights a battle he can’t win with never-ending courage, drive, and of course flair.

You are invited to the premiere film screening of “Driven to Help”, a 55-minute documentary featuring the story of Milford resident Austin Crawford and his ongoing battle with Multiple System Atrophy.

Join Austin in his 1970 Dodge Dart as he drives home the message that no matter how much is taken away, there’s still more to give, whether that’s at a local car show, tattoo parlor, or to his thousands of followers on TikTok.

This film screening event will take place on the big screen at Trinity Church in Watseka on March 11, 2022. Doors open at 6pm, event starts at 6:30pm.

The event will include comments from Austin Crawford as well as the filmmaker Phil Gioja, and a representative from our film sponsor Multiple System Atrophy Coalition, as well as a celebratory screening of the award-winning short documentary “Fighting MSA: Austin Crawford’s Story”.

Admission is free. Any donations given will go towards the Multiple System Atrophy Coalition to support ongoing research efforts.